The Mario & Luigi series of role-playing games are a fun, light-hearted take on role-playing games. There’s no depressed spiky-haired teens to be found here, only two Italian plumbers and a delightful supporting cast. Mario & Luigi: Dream Team Bros. is a very funny game with some great dialogue, it’s just a shame that too much of the dialogue is tutorial.

There’s a lot you have to get through to really enjoy this game, you’ll be getting tutorials very far into the game, even 15 hours into the game. They really hamper the game’s pacing in places. They’re unnecessarily wordy, and only serve to waste time. It’s not satisfying to get through the game’s platforming puzzles when the game tells you exactly what you need to do.

Speaking of pacing, it becomes a bit of a slog at times. It’s much longer than previous games in the series, but doesn’t offer enough compelling content to fit the long playtime, becoming somewhat repetitive, especially in the later areas. 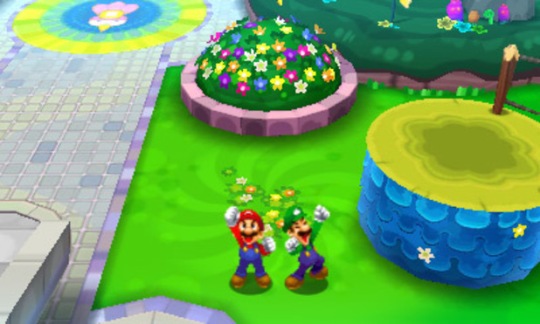 In this game, you explore two worlds, much like Bowser’s Inside Story. In this one however, you have the tropical paradise of Pi’illo Island, which offers an isometric view of the world. You also can go through Luigi’s dreams, which goes back to two-dimensional platforming. In Luigi’s dreams it give you the opportunity to do some kind of ridiculous things with Luigi. It makes the platforming a little more fun being accompanied by a huge crowd of Luigis.

Combat in the game works just like most other role-playing games, you take turns with the enemy to hit each other. What sets it apart from others is that when you attack, you can press buttons in time with the moves to deal more damage. Also when enemies attack, you’re given the ability to counter-attack or even completely dodge them, by jumping over them or hitting them with your hammer.

As simple as the mechanics are, the developers manage to create a variety of different battles, each enemy has it’s own gimmick which you have to work around or possibly even exploit. In the outside world, battles play out with Mario and Luigi together, but in the dream world, you’re just playing as Mario, with his power “enhanced by Luigi’s support”. Dream world battles pit you against a lot more enemies than usual, it changes the flow of the battle a little, and it’s cool to see a load of Luigis follow after Mario’s attack.

Another returning feature is the giant battles, in which now you play as a massive Luigi, and I feel it’s come off worse now. The build up towards these battles is consistently great, but the battles themselves are plagued by unresponsive touch and gyroscope controls, and in later battles enemy turns become much longer. I felt like I was losing agency in the battles by only having an occasional opportunity to attack.

While it’s not a bad game, Mario & Luigi: Dream Team Bros. has it’s issues. If you can put up with them, I’d say you can really have some fun. I just really wished it was shorter.