Proteus is weird. There’s not much else like it out there, however that doesn’t mean to say it’s better than everything else because it’s different.

This is a game of pure exploration, and not much else. It’s a virtual nature-walk with old-school graphics.

There is fun to be had in that, it’s bright colours allow it to look very pretty, and the games music sounds fantastic.

Speaking of music, it is a strong point of the game. The players movement and location controls it, with sombre tracks on high lonely hills, and upbeat melodies in the lush green forests. Each kind of animal you encounter adds their own flourish to the soundtrack, giving the game that extra bit of personality. 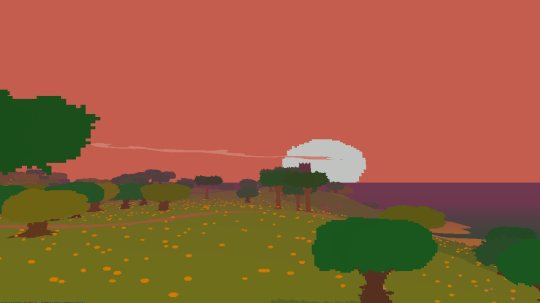 All this sight and sound comes together to something pretty lovely. A short and sweet little game.

The problem however is that it isn’t really much beyond that, it doesn’t offer a lot that the traditional videogame would.

And that could lead some to being very oppositional to it, Proteus is just a game that a lot of people aren’t going to understand, but that’s absolutely fine.

It does make this much harder to write about the game, I’m unsure of the type of person who would like it. I know I did, but people have also told me that it’s the worst thing they’ve played in a while, because it lacks the ‘core parts of being a videogame’.

I’m of the opinion that Proteus is most certainly a videogame, it does fun things with it’s interactivity, and I feel something can easily become a game with the smallest amount of interactivity.

There’s no winning and losing in Proteus, no roadblocks, no challenges, no boss fights. You walk around a little island that looks and sounds really nice. I honestly can’t say whether or not you would like that. It might be worth giving a go, but don’t say I told you it was amazing.

The version of Proteus played for review was on PSVita, it is also available on PS3 and PC. Review code was supplied by Curve Studios.